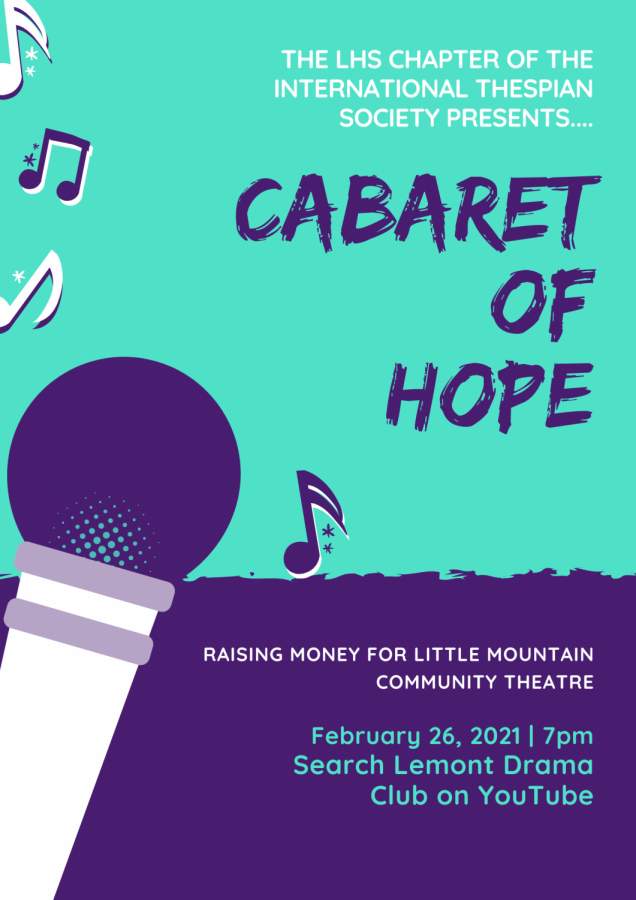 The International Society is hosting it's first cabaret featuring 16 performers. Tickets are free and it can be watched on Lemont Drama Club's YouTube Channel.

The International Thespian Society is set to host its first virtual cabaret, “Cabaret of Hope”,  on Feb. 26, 2021. The cabaret will feature 16 performers performing both songs and monologues. The event is free to watch, but the society is collecting donations for Little Mountain Community Theatre.

During the cabaret, viewers will be able to scan a QR code that leads them to donate to Little Mountain Community Theatre.

Because of COVID-19, the theatre community has been hit hard. Since March, thousands of people have been unemployed- from actors on the stage to ushers or stagehands behind the scenes. Broadway does not have plans to open up until June 2021, and local theatres such as Little Mountain have been working hard to stay afloat.

Although putting on a virtual production has its challenges, the International Thespian Society had frequent meetings to make sure this cabaret runs smoothly. The event will be hosted by two of the society’s own members.

Kaitlyn Tuvilleja, who is performing in the cabaret, is singing a song from the Broadway musical Anastasia. Each person had to record a video and send it to the editing team. “I feel like performers had to critique themselves more now that everything’s virtual”, Tuvilleja said, “the audience can see everything.”

Despite COVID-19 shutting down theatres and cancelling performances, the International thespian society found a way to bring people together through art.

“It was pretty fun…I haven’t auditioned for a lot of things since it was fun to do it again,” Tuvilleja said, “I’m definitely excited to see how it turns out!”

The cabaret will premiere on Lemont Drama Club’s YouTube channel on Feb. 26, 2021 at 7p.m.