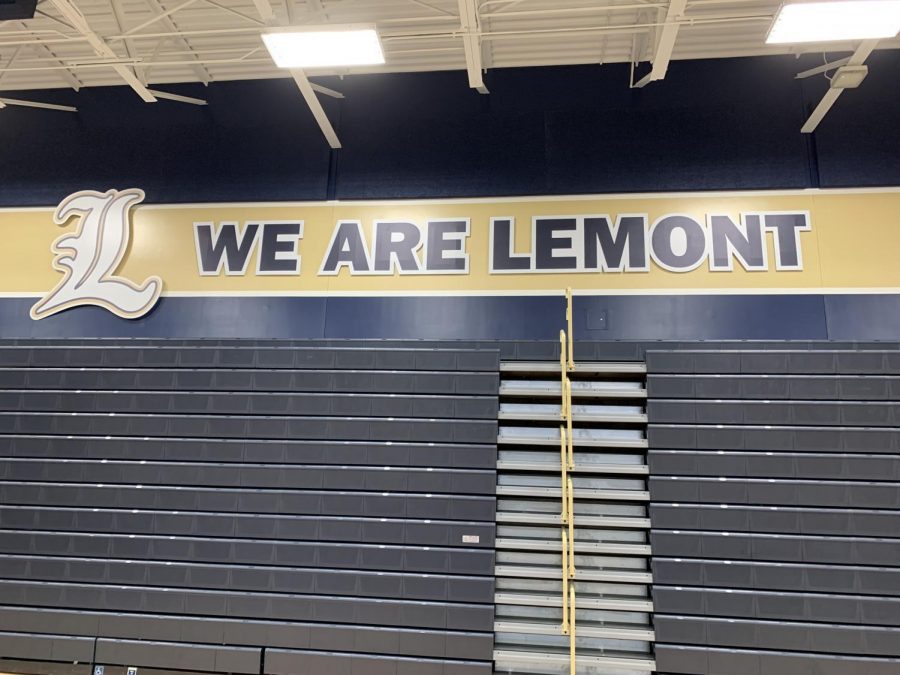 The newly renovated gym exhibits "We Are Lemont" in an effort to reduce costs when the name and mascot changed.

On Monday, July 19, 2021, the Board of Education decided to discontinue the name “Indians” in regard to activities and athletics. Additionally, the logo and mascot of “Indians” will be discontinued.

At the Board of Education’s meeting, all seven members unanimously voted for this resolution. They attribute this vote to achieve the district’s goal: “For all students to become life-long, independent learners and productive citizens in a rapidly changing world.”

Lemont Indians were first used from 1948 to 1968, but then changed to the “Injuns” until 2005. In 2006, the Board of Education changed the name back to “Indians,” with that decision carrying until this year.

In the Board of Education’s statement posted on July 26, the resolution stated that “It is essential Lemont High School promotes students, not only a self image deeply rooted in a sense of personal dignity, but also the development of attitudes grounded in respect for and understanding of other persons, races, religions and cultures.” They also acknowledge that while the imagery of “Indians” may have been “acceptable” at one time, now may be offensive.

While one reason for the decision is attributed to creating an inclusive learning environment for all students, there is also a proposed state legislation that would prevent high schools from using a Native American mascot. If it is passed, any school who continues to use this imagery will be disqualified from any playoffs. Additionally, the phrase “We Are Lemont” has been coined and used in the new gym that was renovated last year. This design reduces the risk for any added costs if the state legislation passes.

Mr. Michaelson, the principal, had no input regarding the decision, and that it was entirely the school board’s decision. “They’re really good people, and they did what they thought was right,” Michaelson said.

The responses to the resolution have been split among community members. The agenda for the meeting was posted two days prior so families and staff would be aware of the subject. The school issued a statement to the media prior to the meeting, but did not contact any media directly.

One news outlet present, CBS News, caught a video of community members yelling threats to vote the board out, and leaving the meeting. “It’s one of those things where you’re never going to make everybody happy,” Michaelson said. “The school board realized that and made the decision they thought was best knowing that you’re going to have a portion happy and a portion not too happy”

So far, the school board has not decided on a new name or mascot. For now, the phrase “We Are Lemont” will be used for activities and athletic events. “The plan is to take time and figure out what’s best for the school instead of rushing into something,” Michaelson said.