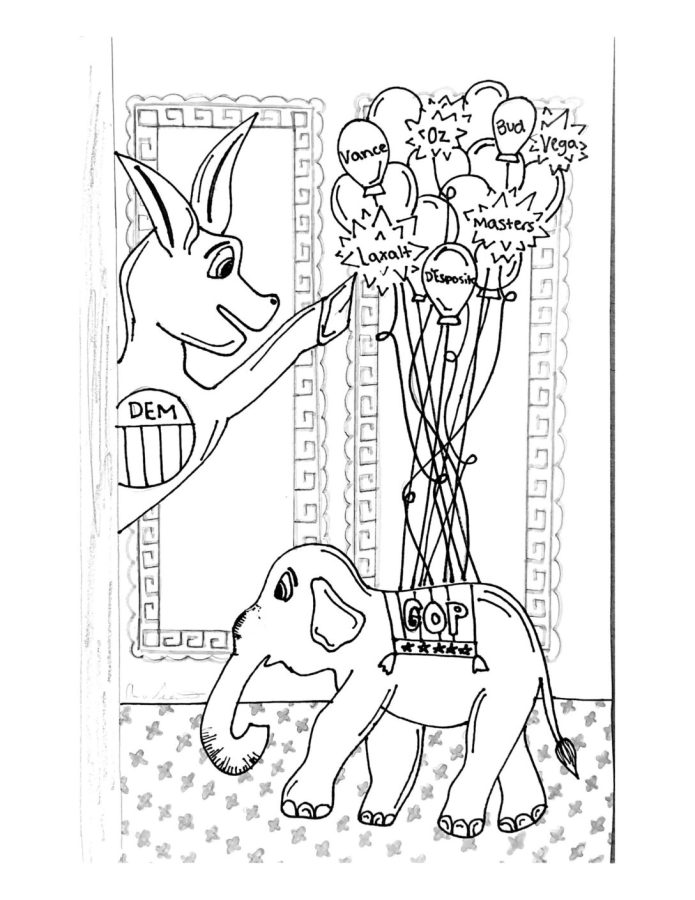 In general, midterm elections tend to be a time for the opposite party to gain traction but in the 2022 midterm election the opposite was seen. With President Biden having two years remaining in his presidency and despite his low approval ratings, his party has successfully held their ground in the Senate and mediated losses in the House of Representatives. But what does this mean for the next two years?

This midterm, it was widely predicted that a “Red Wave” would occur where Republicans were supposedly going to have a landslide victory, but there was extreme upset with the Democrats winning the Senate and the Republicans winning the House by a very small margin. This inability to gain influence does not bode well for the future of the GOP.

It’s hard to tell exactly what caused this Democratic support, but multiple issues occurred with the Republican campaign. For one, many Republican candidates were backed by former President Donald Trump which ended up hurting their chances and provided a great advantage for the Democratic party.

This is happy news for democrats as the former president announced his plan to run for presidency in 2024. His plan to run will split the GOP even further than it already is and further the results of these midterms theoretically paving the path for another democratic victory. It’s as simple as this, if the GOP can’t set themselves apart from Donald Trump their chance for victory will continue to slip away.

The main things that really pushed for this Democratic victory is social issues like climate change, immigration and of course abortion. Following the Dobbs decision and in the weeks before the midterms, Democrat campaigns centered around pro-abortion ideals gaining traction in states like Pennsylvania and Kentucky. The issue of abortion excelled Democrats chances in these usually Republican led states.

Other key victories in Arizona and Nevada aided the Democrats in their quest to retain senate control. This underwhelming support for Republicans in this race is great news for President Joe Biden because it was suspected that due to his low approval rating, Americans would gravitate towards the Republican party but thankfully many stayed to support the Democratic party.

So now, because of these victories, the path for Democratic action in the next two years is open. The Republicans now will not be able to block the election of a Supreme Court nomination if a seat becomes available and the reputation of Biden has been bolstered with this support.

It’s always good to have this type of split where the legislative branch is representative of both parties, Democrats through the Senate and Republicans through the house. It provides the balance of power that we strive to achieve in a democratic government and for both sides to advocate for their causes instead of trying to blame the other side.

Going off this victory, the Democrats can definitely see progress in their future. They have already been able to pass laws like “The Respect for Marriage Act” and continued progress with student loan forgiveness. Victory in a midterm election is rare and signifies that the party will continue dominating the political scene and will hopefully continue this victorious pattern through the crucial presidential election in 2024 and beyond.

Members of the Republican Party were awaiting Tuesday, Nov. 8. The Red Wave that would hit the nation, following the rise in crime and inflation since President Biden was inaugurated, would finally be carried out.

However, that didn’t happen. That Red Wave that many were expecting was barely even a trickle. Hopeful Republican candidates for the Senate, House of Representatives and state offices were defeated even with millions of dollars in funding and advertisements everywhere the eye could look. Following the Nov. 8 election, the Democrats are going to keep control of the Senate, Republicans will take the House with a slight five or six seat majority and Democrats succeeding in the state elections picking up 18 gubernatorial seats over the Republicans 17.

So what went wrong? Why, with inflation at a 40 year high and President Biden’s approval rating at 37%, according to Reuters, did Republicans only win by the slightest of margins?

It’s a simple part of every politician; candidate quality. Many Republican candidates turned towards Former President Donald Trump to gain endorsements that would put them ahead in the primaries. However, once these candidates got to the general election facing storms of Democratic advertisements aligning them with Trump and his election denial, they stood no chance.

Yet, Darren Bailey, the Illinois State Senator from downstate Xenia, won the nomination by a landslide. And why was this close election won by over 30 percentage points? One person helped Darren Bailey win: JB Pritzker.

Through his millionaire spending, the Illinois governor placed advertisements highlighting Bailey to his GOP base. Stating that Bailey is pro-life, defends the 2nd amendment and aligns himself with Former President Donald Trump. This enlightened Republicans to vote for Bailey in the primary and it was all funded by Prtizker.

And Illinois was not the only state where this occurred. All throughout the nation, Democrats were funding far-right candidates that denied the 2020 election and took extreme positions on the current issues of the day. Democrats did this because they knew they would win in the general election against these far-right candidates.

This is exactly what happened. Candidates that seemed to be more moderate had additional success in the November midterms over candidates that thought and continued to say that the 2020 election was stolen.

So what’s next? Simply put, the GOP needs more young, moderate candidates that can appeal to the average American. The policies of the GOP have not been the main problem. When we are selecting boisterous candidates hung up on previous elections we are doomed to lose the war before the battle begins.

2024 will be a critical election year for the entirety of the United States. It is important to show up and vote to make sure we are putting our best foot forward and making a difference.